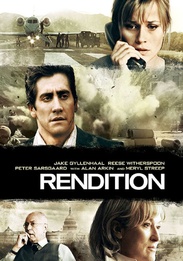 A thriller that centers on Isabella El-Ibrahimi, the American wife of Egyptian-born chemical engineer Anwar El-Ibrahimi, who disappears on a flight from South Africa to Washington. Isabella desperately tries to track her husband down, while a CIA analyst at a secret detention facility outside the U.S. is forced to question his assignment as he becomes party to the man's unorthodox interrogation.

Rated R for for torture/violence and language.