Doppelganger: The Evil Within 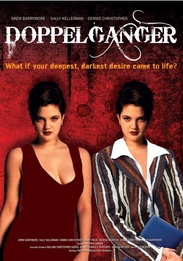 Holly Gooding (Drew Barrymore) moves from NYC to LA after the murder of her mother, in which she has been implicated. Patrick Highsmith, a local writer, has a room for rent and makes the dual mistake of renting to Holly and then, beginning an affair with her. It doesn't take long for a series of strange, inexplicable events begin to happen and he begins to question if the affair is with Holly or her seductress doppelganger, who is capable of almost any evil imaginable. It soon becomes crystal clear that she was followed from LA by what is apparently her evil alter- ego. Doppelganger is a tale of supernatural suspense and psychological terror and confirms that in nature, every element has duality. Every male has a female, every day has a night, and every good has evil. In all of us, there too exists this duality. But in one desperate young woman, there is something terrifying and something unimaginable.