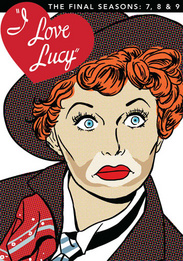 The I Love Lucy Hour Shows is a series of hour-long specials that aired from 1957-1960 that continued the I Love Lucy saga. Housewife Lucy Ricardo (Lucille Ball) lives in Westport Connecticut, with her bandleader husband, Ricky ( real-life husband Desi Arnaz,) and their son, Ricky Jr. (Keith Theibodeaux.) Always nearby are the couple's best friends Fred and Ethel Mertz (William Frawley and Vivian Vance.) Ricky's job as an entertainer requires him to travel a lot. As a result, he often takes Lucy, little Ricky, and the Mertzes with him to such far-off places as Japan and Mexico. Ricky's career also allows him to meet many famous celebrities, from Betty Grable to Ida Lupino. Of course, when Lucy meets up with these celebrities, chaos naturally ensues.