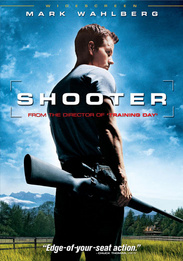 Bob Lee Swagger (Mark Wahlberg) is a former Marine Corps sniper who leaves the military when a mission goes bad. After he is pressed back into service to foil an assassination attempt on the President, Swagger finds himself double-crossed again and framed for the attempt.

The subject of a nationwide manhunt, he must fight to clear his name and bring his framers to justice, a fight he knows he can't win... unless...

Rated R for strong graphic violence and some language.