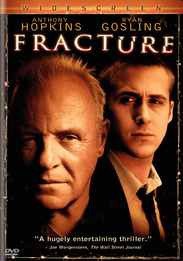 Anthony Hopkins and Ryan Gosling star in the dramatic thriller Fracture. When a meticulous structural engineer (Hopkins) is found innocent of the attempted murder of his wife (Embeth Davidtz), the young district attorney (Gosling) who is prosecuting him becomes a crusader for justice. Fracture is packed with twists and turns that weave in and out of the courtroom as the pair try to outwit each other.