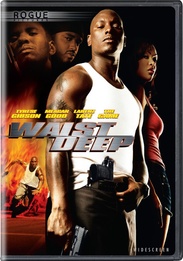 Waist Deep is the explosive, action-packed thriller starring a young and sizzling cast including Tyrese Gibson, Meagan Good, Larenz Tate and The Game.

It's the story of a man racing against the clock to save his son in the violent streets of Los Angeles. This DVD is a non-stop!