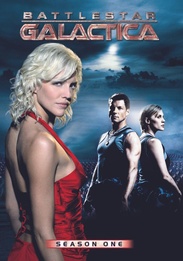 With the 12 colonies of man virtually destroyed in the climax of a hundred-year war with the Cylon Empire, President Roslin (Mary McDonnell) and Commander Adama (Edward James Olmos) gather up the few humans left and embark on a journey to find the mythical planet Earth, not realizing that the Cylon robot is no longer a recognizable enemy. Battlestar Galactica is a complete re-imagining of the 1970s series - upping the ante on the action, adventure, and drama that made the original so popular. Now, experience all 13 thrilling episodes of Season 1 and the four hour TV miniseries that started it all in this 5 disc DVD set loaded with explosive bonus features and presented in Dolby 5.1 Surround Sound.