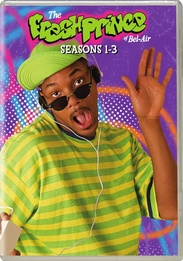 Will Smith stars as a teenager from inner city Philadelphia who's sent to California to live in with his wealthy relatives in the hopes that they will "straighten him out and teach him some good old-fashioned values." Fresh Prince of Bel-Air: The Complete First Season is a 4-disc collection set featuring lively bonus material plus all 24 Season-One Episodes, from Will's first day at the country club (which one is the fish fork?) to his first day at Bel-Air Prep School (sort of homeboy meets Harvard). When it comes to comedy, Fresh Prince rules! In Season Two, Bel-Air is starting to feel like the hood for Will. His Philly roots run deep, but even a street-smart rapper can wrap his mind around croissants and credit cards and his arms around upscale hotties. Guest stars include Queen Latifah, Milton Berle and Zsa Zsa Gabor. There's a lot hip-hoppenin' in the Fresh Prince's Third Season showcased in a fabulous 4-Disc Set. Philip runs for Superior Court judge. Vivian develops a taste for sardines and Rocky Road (guess who's pregnant). Hilary lands a gig as a TV weather reporter. But the biggest story is that Will is ready to graduate. He's checking colleges (including sororities from alpha to gamma to bad-mama jamma). And choking when his mom wants him to come back to Philly ? because this homeboy realizes that home now means the fly flair of Bel-Air!