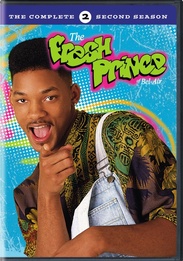 Will Smith stars as a teenager from inner city Philadelphia who's sent to California to live with his wealthy relatives in the hopes that they will "straighten him out and teach him some good old-fashioned values. On Season 2, Bel-Air is starting to feel like the hood for Will. His Philly roots run deep, but even a street-smart rapper can wrap his mind around croissants and credit cards and his arms around upscale hotties. Guest stars include Queen Latifah, Milton Berle and Zsa Zsa Gabor.