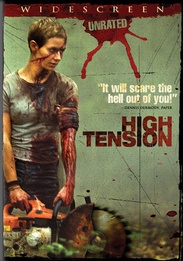 HIGH TENSION is an intense game of murder and survival, which will rattle viewers to their core. Marie and Alexia are classmates and best friends who go to Alexia's family home in the French countryside hoping to prepare for their college exams in peace and quiet. In the dead of night, a psychotic killer breaks into the house, and with the first swing of his knife, the girl's idyllic weekend turns into an endless nightmare. When Alexia is captured and thrown into a van, Marie attempts to rescue her friend from the evil murderer. High Tension truly brings slasher films back to their roots with this gore-addled film, packed with blood and guts.