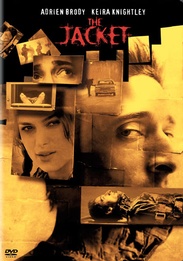 A war veteran returns home suffering through periodic bouts of amnesia. He recovers from one such bout to discover that he is being charged with the murder of a police officer.

At the trial, he is found not guilty by reason of insanity and he's sent to an asylum where a doctor experiments with a risky treatment involving drugs, a strait jacket and a morgue drawer. The treatment causes him to see into the future and his untimely death.

Now, he has to work out the future murder plot before the time runs out on his life.