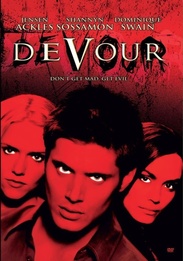 Jake Cummings is your average high school teenager, but his life is irrevocably changed when a fellow student introduces him to a video game called "The Pathway".

After submitting his information into the computer software, Jake finds that he is having visions of a half-goat/half-human creature called The Beast. One by one, his friends suffer the same fate, death by self-mutilation, always the same death.

As Jake tries to unravel the mystery, he is aided by Marisol, the young woman who cares for his crippled mother. When Jake realizes that The Pathway is the cause of the deaths, he confronts it's creator, Dale Kater, a satanist.

It is this encounter with Kater that reveals to Jake the identity of The Beast and puts him in a race against time to end the bloodshed and save his crippled mother.