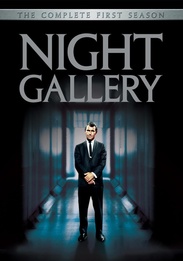 Night Gallery was creator-host Rod Serling's follow-up to The Twilight Zone. Set in a shadowy museum of the outre, Serling weekly unveiled disturbing portraiture as preface to a highly diverse anthology of tales in the fantasy-horror vein.

The variety of material brought with it a variety of tone, from the deadly serious to the tongue-in-cheek, stretching the television anthology concept to its very limits. Contains twenty Night Gallery stories, including the original pilot and the complete first season.