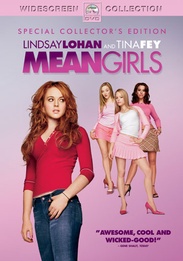 Raised in the African bush country by her zoologist parents, Cady Heron thinks she knows about "survival of the fittest." But the law of the jungle takes on a whole new meaning when the home-schooled 15-year-old enters public high school for the first time and falls prey to the psychological warfare and unwritten social rules that teenage girls face today.

Rated PG-13 for sexual content, language and some teen partying.