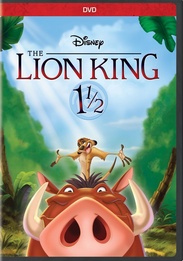 In this all-new comedy-adventure, Timon and Pumbaa reveal where they came from, when they met, and how they helped Simba save the Serengeti. Their story includes glimpses into some big events from The Lion King that look a little different from Timon and Pumbaa's perspective -- such as when King Mufasa introduced baby Simba to the animal kingdom. Let's just say there was something behind that dramatic moment when all the animals bowed to their new ruler.