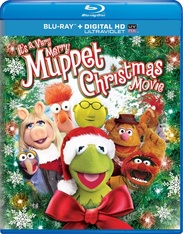 Join Kermit the Frog, Miss Piggy, Fozzie Bear, Gonzo and the entire Muppet gang in Itâs a Very Merry Muppet Christmas Movie! âTis the night before Christmas and the Muppet Theater is in danger of being torn down. When bad goes to worse, Kermit begins to believe that the world would be a better place if he had never been born. With a little heavenly help and hilarious holiday shenanigans, Kermit and the Muppets discover what matters most is their love for each other. Featuring a celebrity cast including David Arquette, Joan Cusack and Whoopi Goldberg, plus show-stopping musical numbers like âMoulin Scrooge,â this heartwarming holiday classic will bring joy to the world every Christmas season!