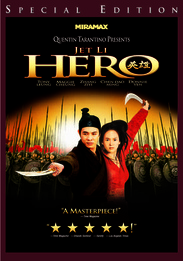 In an ancient land, a tyrannical leader oppresses his people and causes general unrest. With his massive army and iron fist justice, the ruler is unchallenged until a nameless warrior rises up from the masses on a quest for revenge.

To avenge the massacre of his people, the warrior must come face to face with the ruthless emperor.

Rated PG-13 for stylized martial arts violence and a scene of sensuality.