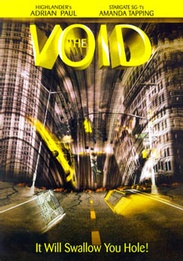 Quantex has developed a super collider, which has the potential to solve the world's energy crisis. Kat Hicks is one of a dozen Quantex team members working under the direction of Dr. Nixon, the world's foremost particle acceleration expert. When the super collider is accidentally activated it sets off a chain reaction creating an expanding black hole. In the frenzy, Kat makes her escape and has a mere 24 hours to stop The Void from devouring the Earth.