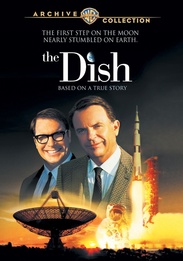 It's the biggest event since sheep invented wool! Apollo 11's astronauts will walk on the moon -- and the 1,000-ton satellite dish in tiny, sheep-farming Parkes, Australia, will beam that historic first step around the globe. But as giddy citizens prepare for the moment when the entire world will depend on them, the dish flatlines. And its unconventional Aussie crew and its by-the-book NASA supervisor from the U.S. have very different ideas about how to fix it. A culture clash of cosmic proportions erupts in this fact-based tale of how the biggest televised event in history was almost not televised. The Dish, with Sam Neill (Jurassic Park), Patrick Warburton (Seinfeld) and others in a skilled ensemble portraying a spirited array of techies and townies, "will send you to the moon and back laughing" (Bruce Kirkland, Toronto Sun).