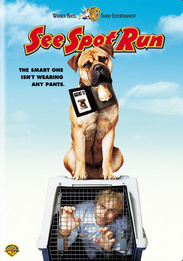 Offbeat mailman Gordon Smith has never met a dog he couldn't handle, butwhen he offers to baby-sit James, the young son of his beautifulneighbor Stephanie, his dog skills are put to the test! When acrime-fighting superdog hiding from the Mob befriends James, he drivesour "dog-loving" mailman up a tree, dodges the Mob and wins the heartsof the good guys along the way.