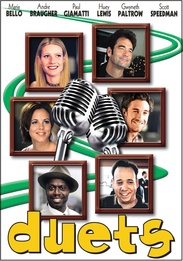 "Duets" is a road-trip film about six individuals who throw off the binds of their pre-determined lives and strive to fulfill their dreams. The metaphor for this is Karaoke -- the courage to stand up, sing and be free. They are: a waitress (Maria Bello) from Wheeling, West Virginia desperate to get to California to become a recording star, an ex-con (Andre Braugher) unwilling to bend to the rules of society who sings with the voice of an angel, a salesman (Paul Giamatti) who melts down while chasing the American Dream, a seasoned Karaoke hustler (Huey Lewis) who is disconnected from everybody and everything, an innocent Vegas showgirl (Gwyneth Paltrow) searching for family and love, and a young down-on-his-luck cab driver (Scott Speedman). Each is searching for the meaning of life. As they converge on the $5,000 Grand Prize Karaoke Contest in Omaha, Nebraska, their lives intertwine, revealing the funny, raucous world of Karaoke bars and chain hotels that link the interstates of Middle America.

Rated R for language and some sexuality.