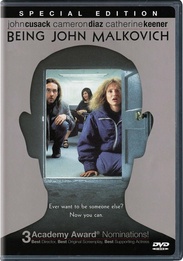 Craig Schwartz (John Cusack) is a struggling street puppeteer. In order to make some money, Craig takes a job as a filing clerk. One day he accidentally discovers a doorâ¦ a portal into the mind of John Malkovich (played by John Malkovich)! For 15 minutes, he experiences the ultimate head trip â HE is John Malkovich! Then heâs dumped out onto the New Jersey turnpike! With his beautiful office mate Maxine (Catherine Keener) and his pet-obsessed wife (Cameron Diaz), they hatch a plan to let others into Johnâs brain for just $200 a trip. See what all the critics are talking about.

Rated R for language and sexuality.