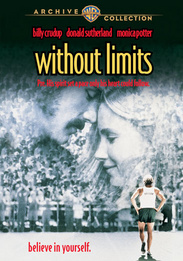 Steve Prefontaine was a champion's champion, holder of every American distance running from 2,000 to 10,000 meters. Fans elevated him to rock star status. Athletes were inspired by him. Off the track, officials mired in outdated politics got the point that activist Pre was taking the sport into a new era. The short life and fast times of the fiery Oregon distance runner form a movie that "belongs in the company of Jim Thorpe - All American and Chariots of Fire" (Jack Mathews, Newsday). Billy Crudup, uncannily resembling the real-life Pre, and Donald Sutherland, as coach and mentor Bill Bowerman, give strong portrayals of lives aflame with conviction. Infused with track-savvy authenticity by director Robert Towne and his co-writer Kevin Moore (Prefontaine's friend and a former world-class runner), Without Limits comes home a winner.