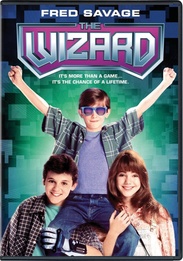 Starring Fred Savage (TV's "The Wonder Years"), The Wizard is a warm-hearted family adventure that showcases the excitement and thrills of video game competition in the 1980s! Corey (Savage) refuses to let his emotionally disturbed younger brother Jimmy (Luke Edwards) be institutionalized and the two run away together. They soon join forces with a resourceful girl (Jenny Lewis) who notices that Jimmy has a special talent: he is a "wizard" at video games and gets the high score on absolutely everything he plays. Evading their parents and a sinister bounty hunter, the trio head for a climactic showdown at the video game championships in California. Co-starring Beau Bridges and Christian Slater, it's an inside look at the world of video gamers that will have you cheering the whole way!