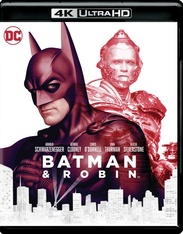 The dynamic duo, Batman and Robin, the protectors of Gotham City who are really Bruce Wayne and Dick Grayson, find themselves with two new villains to battle. The first is Mr. Freeze, a former scientist who, when trying to find a cure for his wife's disease, fell into frozen mixture that forever changed his molecular structure. Having to wear a refrigerated suit, Freeze is constantly in search of diamonds to keep it powered and uses a freezing ray that ices over anyone in his way.

The other villain is Poison Ivy, formerly Dr. Pamela Isley, who also survived a molecular change that made her kisses deadly and full of poison. Her main weapon, beyond her kiss, is a pheromone dust, that romantically fogs the mind of those exposed to it. Subjecting both Batman and Robin to the dust, she creates a rivalry betweenthe two that threatens to undermine their work and Bruce's relationship with girlfriend Julie Madison. Coming to the duo's aid is Barbara Wilson, the niece to butler Alfred Pennyworth, who suits up as Batgirl to help stop Freeze and Ivy's plans to destroy humanity.

Rated PG-13 for strong stylized action and some innuendos.