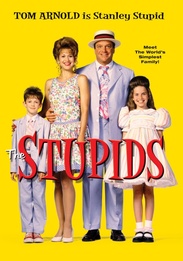 From director John Landis (An American Werewolf in London) comes a family who puts the dumb back in stupid! Meet Stanley, Joan, Buster and Petunia...The Stupids. The lovable but dimwitted Stupids have a problem, because they've just discovered that their trash is being stolen. It's a crime of unimaginable proportion and they are going to get to the bottom of it! Little do they know that they're investigation will uncover an illegal weapons ring. Now the fate of the world lies in their hands...oops!