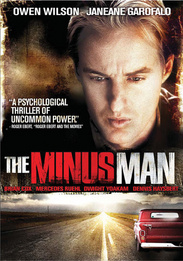 A cold-blooded serial killer (Owen Wilson) floats around the country and chooses his victims from people who complain about their lives and indicate a willingness to be killed. His murders are introduced with the killing of an asthmatic junkie (Sheryl Crow). The killer settles into a seaside rooming house run by an unhappy married couple (Brian Cox who should be remembered as the serial killer from "Manhunter", Mercedes Ruehl) and waits for his next victims to unveil themselves. Dream cops (Dennis Haysbert, Dwight Yoakam) plague his nights, while plotting his murders. Meanwhile, he also starts a relationship with a postal clerk (Janeane Garafalo), which momentarily misleads one into thinking he is ready to give up his murderous life.