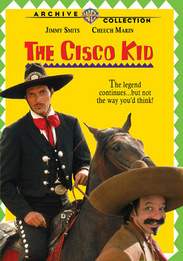 The Cisco Kid rides again in this high-spirited action adventure, starring Jimmy Smits and Cheech Marin. With the juaristas locked in a life-and-death struggle with the armies of France, the fate of Mexico lies with Cisco (Smits) and Pancho (Marin), two unlikely heroes who meet while escaping a French firing squad. Joining forces, the two battle their way to the governor's palace, where they hope to recover El Nino, a stolen religious artifact that will cost Mexico the war if it's not returned. Created by O'Henry in 1907, the Cisco Kid was the hero of over two dozen films, three radio series and a long-running TV show. In 1994, the Kid galloped back into action in this original TNT movie directed by La Bamba's Luis Valdez. Shot on location in Mexico, The Cisco Kid also features the eponymous titled track performed by Cheech Marin and War, an updated version of the band's 1972 hit.