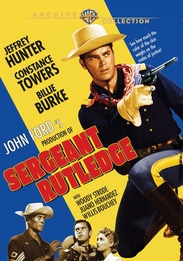 In 1866, new fighting units are formed within the U.S. Cavalry: the courageous 9th and 10th regiments. Plains Indians call them Buffalo Soldiers because of the bison coats they wear in winter. History, judging from the regiments' list of Medal of Honor winners, calls them heroes. Against this backdrop, legendary director John Ford crafts the story of Sergeant Rutledge (Woody Strode), a 9th Cavalry officer on trial for rape and murder. Lt. Cantrell (Jeffrey Hunter) defends Rutledge as witnesses give testimony (relived in flashbacks) revealing the sergeant's gallantry -- and the shocking truth behind the alleged crimes. Ford, who attacked racism in The Searchers, explores similar territory in this landmark Western, the power of which still rings out with uncommon force decades later.