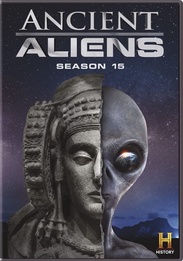 From prehistoric stone monoliths and sacred temples to dragon gods and time travelers, this season of HISTORYÂ®âs ANCIENT ALIENSÂ® explores ancient technology and timeless relics that span the globe and the galaxy. As the government shifts from denial of the existence of extraterrestrials presence on Earth to releasing their extensive â formerly secret â reports on unexplained phenomena, there is growing belief that aliens may not be visitors from other planets, but perhaps creatures from our own future. Do these findings reveal alien origins, or the origins of humanity?