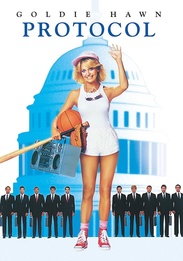 Will the corridors of power in our nation's capital ever be the same? Not after Sunny Davis (Goldie Hawn) arrives. The ditzy D.C. cocktail waitress goes from serving drinks to serving her country after saving an Arabian dignitary from an assassination attempt. What Sunny thinks, she says. And what she says and does is hugely funny, thanks to work by writer Buck Henry (The Graduate), director Herbert Ross (The Goodbye Girl) and Academy Award winner* Hawn, charmingly back in her country's service after cheery stints in Private Benjamin and Swing Shift and putting her politics where her heart is -- as well as her Protocol.