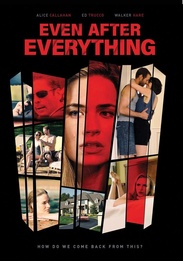 Clara Warren (Alice Callahan) lives a life of abundance with her husband, Richard (Ed Trucco) and two children, Wesley (Azhy Robertson) and Samantha (Rainn Williams) in the Hamptons. The problem is that Clara cannot shrug off the feeling that something is off in her marriage. On a whim, Clara decides to call Richard to open up about her feelings and rekindle their communication. Of course, Richard minimizes Clara's concerns and pretends that he is too busy to talk. But carelessness gives Richard away on the phone and Clara realizes that he is having an affair. Furious, Clara packs a bag in a hurry and is in the process of leaving with the kids when her estranged brother-in-law, David (Walker Hare) arrives out of nowhere, saying that he needs to speak to his brother, Richard. Knowing that it will infuriate Richard, Clara invites David into their home and offers him to stay for as long as he desires. A desperate power struggle ensues where nothing is sacred because all bets are off when it comes to love and war and family.