Man With A Plan: Season 4 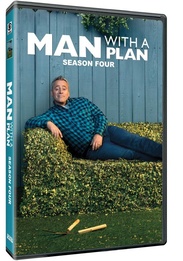 MAN WITH A PLAN stars Golden Globe winner Matt LeBlanc in a comedy about an old-school guy confronting the modern challenges of parenting, marriage, and family. After hitting a rough patch with his construction business, Adam's self-assured wife, Andi, has proposed they start a house-flipping business together along with his clueless brother, Don, and unlikely friend, Lowell. In the midst of all this, Adam also has to juggle his three children and deal with his bossy sister-in-law, Marcy, and his opinionated father, Joe, who enjoys giving him terrible advice about how to run his life. With Andi's encouragement, Adam takes charge of his brood, lays down the law, and discovers he's going to "nail" this job.