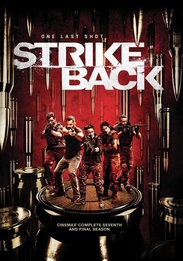 The Iconic Cinemax action series Strike Back returns for its seventh and final season, following our intrepid warriors for one last adrenalized story line that culminates in a heart-pounding climax. When an Albanian crime family kidnaps a scientist responsible for the development of a top-secret bioweapon, the covert special-ops soldiers of Section 20 -- Gracie Novin (Alin Sumarwata), Thomas "Mac" McAllister (Warren Brown), Samuel Wyatt (Daniel MacPherson), Manisha Chetri (Varada Sethu) and commanding officer Alexander Coltrane (Jamie Bamber) -- are sent on a mission to secure the virus and take down its potential black-market buyers. But what starts as a relatively straightforward mission quickly escalates into a race against the clock to neutralize an even deadlier weapon of mass destruction pursued by a pair of jihadist brothers.