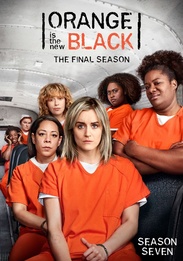 In the seventh and final season of the Golden Globe® award-nominated comedy-drama from Primetime Emmy®-winning executive producer Jenji Kohan (1997, Outstanding Variety, Music or Comedy Series, Tracey Takes On...), the all-star cast of inmates face circumstances that take drastic and unexpected turns. After being granted early release, Piper struggles with the demands of parole and life on the outside, while other inmates  some in Litchfield and others in immigration detention facilities  experience a mix of disappointment, redemption, and hope in this compelling conclusion of the dark-humored, genre-defining series.