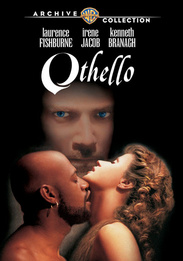 Promote someone else to the rank of lieutenant? Over Iago's dead body! And more pointedly, over the dead bodies of nearly everyone ensnared in Iago's plot of revenge. Jealousy, passion, misplaced trust: the themes of Shakespeare's towering tragedy permeate this fresh Othello from writer/director Oliver Parker (An Ideal Husband). Kenneth Branagh (Iago), Irene Jacob (Desdemona) and Laurence Fishburne as the title-role warrior who ruled armies but not his own heart play the principals in this tale set in Renaissance Venice -- yet belonging to the ages. The Moor who "loved not wisely but too well" commands attention now and for generations to come in this version played and filmed both wisely and well.