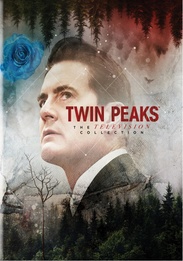 For the first time, in one collection, the complete television phenomenon TWIN PEAKS: - All 29 episodes of the original groundbreaking seasons. - All 18 parts of the "Limited Event Series" -the return to Twin Peaks - that captivated audiences 25 years later, written by the series co-creators and entirely directed by David Lynch. - A wealth of intriguing, behind-the-scenes special features. So grab a cup of coffee, a slice of cherry pie, and experience the legendary mystery... again and again!