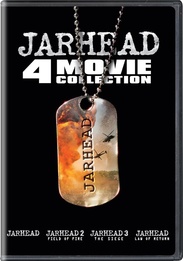 Jump right in the trenches of war with the Jarhead 4-Movie Collection! Jake Gyllenhaal, Jamie Foxx, Scott Adkins, Amaury Nolasco, Devon Sawa and an all-star cast fuel the nonstop action in all four films from the military franchise. Follow Jarheads from boot camp, to plotting an escape plan from the Taliban, to protecting a U.S. Embassy, to a covert rescue mission in Syria. Loaded with hours of bonus features and explosive action, the Jarhead 4-Movie Collection is the ultimate action-packed war saga.