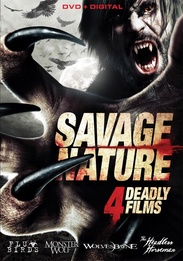 As seen on The Syfy Channel!

Flu Birds  STARRING: Clare Carey, Lance Guest, Jonathon Trent
A tight-knit group of teens find themselves fighting for their lives when unexpected visitors - a flock of flesh-eating birds infected by a malicious virus - crash their carefree camping trip in the woods. Can a shrinking group of survivors fight back and reclaim the skies?

Headless Horseman  STARRING: Billy Aaron Brown, Richard Moll
College friends en route to a party find themselves stuck in the middle of nowhere when they take a wrong turn and land in the uncharted town of Wormwood. As if that weren't weird enough, they're also being chased by a killer who's lost his head.

Monster Wolf  STARRING: Robert Picardo, Leonor Varela, Jason London, Griff Furst
A creature of ancient legend manifests, bound to protect the ecological balance of the land and killing anyone that threatens it. This elusive guardian is initially both feared and celebrated by the locals, but when a deadly curse affects them all, they must unite and recapture the monster wolf's spirit or face their ultimate doom.

WolvesBayne  STARRING: Jeremy London, Marc Dacoscos, Yancy Butler, Christy Carlson-Romano, Rhett Giles
An arrogant real estate developer, Russell Bayne (Jeremy London of 7th Heaven, Party of Five, Mallrats), is bitÂ­ten by a werewolf and finds himself mixed up in a supernatural war between vampires, werewolves, and humans that hunt down such creatures that threaten mankind. In masterful swordfights and bullet-spraying gun battles, they must fight the evil vampire clan to assemble several magical amulets that will stop Lilith's rise to power and put her away for eternity.