Queen of the South: The Complete Third Season 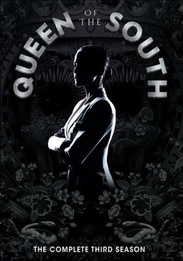 QUEEN OF THE SOUTH tells the powerful story of Teresa Mendoza, a woman who is forced to run and seek refuge in America, and her eventual rise to power over her own drug trafficking empire. In Season 3, Teresa strikes out on her own, determined to build a new empire for herself. But as enemies old and new close in, she realizes that being Queen will require more work - and more sacrifice - than she ever imagined.Starring Alice Braga (City of God, I Am Legend) as Teresa, the original drama series is based on the global best-selling novel La Reina Del Sur, by internationally acclaimed author Arturo Perez-Reverte. The literary page-turner also yielded a popular super series for USA's sister network, Telemundo. The series is co-produced by Fox 21 Television Studios and Universal Cable Productions. David T. Friendly serves as executive producer alongside executive producer and showrunner, Natalie Chaidez.