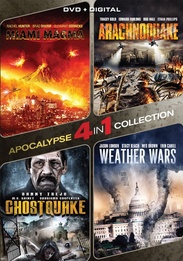 It's a storm of epic proportions when 4 apocalyptic disaster movies come together in one cataclysmic collection.

Arachnoquake  2012  Not Rated - Edward Furlong, Tracey Gold, Bug Hall, Dane Rhodes, Ethan Phillips
An earthquake in New Orleans opens up a series of fissures around the city. A family discovers there is a greater danger at hand: a species of giant fire-breathing spiders has evolved deep underground, and the seismic activity has awoken them from hibernation and allowed them to cause mayhem on the surface.

Ghostquake  2013 - Not Rated  Danny Trejo, Charisma Carpenter, M.C. Gainey
Teenagers become trapped in their high-school by the ghost of a former principal, who has returned from the dead seeking revenge. The evil spirit's grandson and the mysterious janitor must fight to save the students from a sinister fate.

Miami Magma  2011  Not Rated  Rachel Hunter, Cleavant Derricks, Brad Douriff
Follows prodigy vulcanologist Antoinette Vitrini and her sister Emily as they attempt to blow the whistle on an illegal oil drilling scheme before it sets off the eruption of a super-volcano directly beneath Miami.

Weather Wars  2011 - Not Rated  Jason London, Wes Brown, Erin Cahill, Stacy Keach
The two estranged sons of a once-renowned scientist discover all their father's enemies have died in freak weather accidents. They discover he has developed a means to control the weather and must stop him from destroying Washington.