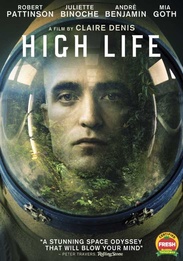 Monte (Robert Pattinson) and his baby daughter are the last survivors of a damned and dangerous mission to deep space. The crew-death-row inmates led by a doctor (Juliette Binoche) with sinister motives-has vanished. As the mystery of what happened onboard the ship is unraveled, father and daughter must rely on each other to survive as they hurtle toward the oblivion of a black hole.

Rated R for disturbing sexual and violent content including sexual assault, graphic nudity, and for language.