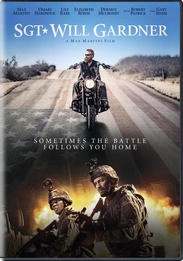 A forgotten Iraq war veteran with severe PTSD is trying to pick up the pieces of his life. After a series of setbacks, he decides to steal a motorcycle and embarks on a cross-country road trip to reunite with his wife and son. Along his journey, he tries to pick up the pieces of a life he's lost since returning from combat and experiences frequent flashbacks to the Iraq War and frequently has conversations with his best friend and war buddy.