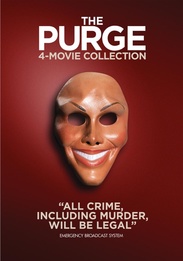 Welcome to an America where all crimes are legal for one night a year in The Purge 4-Movie Collection. A family finds their home under siege by a mob that will stop at nothing to kill them in The Purge. The Purge: Anarchy finds five strangers banding together to take down the bloodthirsty gangs who pursue them. When a presidential candidate threatens their rule in The Purge: Election Year, the government targets her for assassination on Purge Night. The prequel The First Purge welcomes you to the movement that began as a sociological experiment in one isolated community but spread across the nation. Set in a future only a few years away, The Purge 4-Movie Collection is an explosive series of pulse-pounding thrillers where anyone can get away with murder!