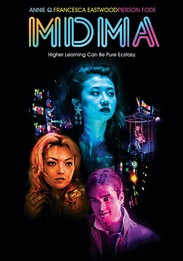 When Angie (Annie Q., The Leftovers), a damaged but brilliant young woman from a tough urban background, is accepted at a prestigious university, she sees a way out of her troubled life. But when her financial aid is cut, she breaks into the organic chemistry lab and synthesizes the drug Ecstasy in order to supplement her income and stay in school. Becoming one of the west coast's largest distributors of "X," cutting deals on campus and in posh nightclubs, her dual life  as a "model minority" coed and a profit-driven drug dealer - becomes further complicated by the effect it has on those she cares about the most, including a young underprivileged girl who reminds Angie of her own dark past. As Angie's increasingly reckless ways spin her life and the lives of those around her out of control, she must learn to transcend the hardships of her past and step into the light.