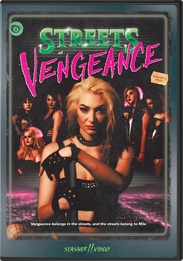 A throwback to the gritty action-thrillers of the 80s (Angel, Vice Squad, Ms. 45), Streets of Vengeance stars Delawna McKinney (Cinco De Mayo) as Mila, an ex-porn star whose decision to leave the industry is interrupted when sheâs kidnapped by a militant misogynist sect known as The Sword, intent on ridding the world of women who they believe are using their sexual powers to destroy men. The Swordâs plans are thwarted when Mila kills her captor, and with the help of Brian (Anthony Toâomata, Cinco De Mayo), a local journalist, escapes.

Emboldened, Mila recruits her friends from the adult film community who form a ragtag militia and set out to destroy the cult of The Sword.