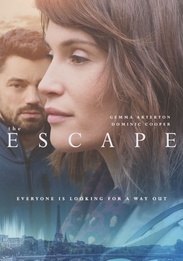 A woman sets out to reclaim her life in this stirring, emotionally rich look at what it means to start over. Tara (Gemma Arterton), a housewife in suburban London, is living a life that is no longer hers: it belongs to her overworked, self-absorbed husband (Dominic Cooper); her young son and daughter; and the numbing routine of housework and childcare. In desperate need of a change, Tara one day makes a bold decision. Armed with a one-way ticket to Paris, she leaves everything behind to rediscover herself in a new cityâbut walking out on your life isnât so simpleâ¦ Built around a remarkable central performance from Gemma Arterton, The Escape is a perceptive, deeply compassionate portrait of a woman on the rocky road to becoming herself.