The Con is On 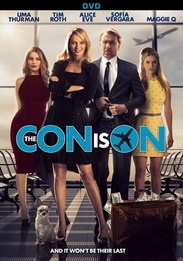 Rated R for language throughout, drug and alcohol use, some sexual content and violence.