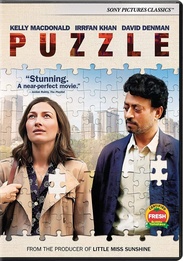 After years of concerning herself exclusively with the needs and wants of her husband and sons, Agnes has found something that she wants to do: puzzling. Stepping out of her domestic bubble to pursue her new hobby, Agnes meets Robert, a wealthy, reclusive inventor who recruits her as his partner for an upcoming world jigsaw tournament. Each day she spends out in the world takes Agnes further along on the road to a new understanding of herself.