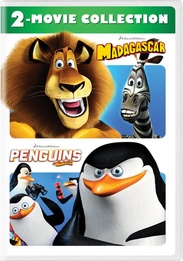 Madagascar
Move it! Move it! for Madagascar from the studio that brought you Shrek and How to Train Your Dragon. When four pampered animals from New York's Central Park Zoo accidentally find themselves shipwrecked on the exotic island of Madagascar, they discover it really IS a jungle out there! Ben Stiller, Chris Rock, David Schwimmer and Jada Pinkett Smith headline an all-star cast of hilarious animals, including a quartet of mischievous penguins and legions of lemurs, led by the outrageous King Julien. Madagascar is a roaring good family film that you'll go wild for again and again!

Penguins of Madagascar
They're cute...they're cuddly...they're back! From the creators of Madagascar comes the hilarious new movie that proves global espionage is for the birds! In DreamWorks Animation's Penguins of Madagascar, your favorite super-spies-Skipper, Kowalski, Rico and Private-join forces with the elite North Wind team to save the world. It's a side-splitting, globe-trotting adventure the whole family will love!